This event is non-contact, Blocking and Tackling are not allowed.

Ø There are no kickoffs.

Ø If the offensive team fails to cross midfield, possession of the ball changes and the opposition starts its drive from its 5-yard line.

Ø All possession changes, except interceptions, start on the offense's 5-yard line.

Ø Teams consist of up to 10 players (5 on the field with 5 substitutes). It is suggested that teams have 8 players on their roster.

Ø Teams may play with a minimum of four (4) players (due to injuries).

Ø If less than 4 players are available, the game is forfeited by the side that is unable to field a team.

Ø Each time the ball is spotted the offense has 30 seconds to snap the ball.

Ø Extra point: 1 point. (played from midpoint of 5-yard line only)

Ø Extra point: 2 points (played from midpoint of 12-yard line only)

Ø Note: An Interception return to the opponent’s end zone on any extra point play by the defense will result in the defense scoring 2 points plus possession for next series at its 5-yard line.

Ø To start the play, the ball must be snapped between the legs of the snapper.

Ø The quarterback is the player who receives the ball directly from the snap.

Ø The quarterback cannot run with the ball past the line of scrimmage, unless he has handed the ball off, tossed or pitched, and it has been returned to him.

Ø An Offense may use multiple handoffs behind the line of scrimmage.

Ø Tosses or sweeps behind the line of scrimmage are allowed and are running plays.

Ø Once the ball carrier has crossed the line of scrimmage the ball cannot be handed off, tossed, pitched or passed in any way.

Ø "No-running zones," are located 5 yards in front of each end zone. When the ball is on or inside the 5-yard line going towards the opponent’s end zone, the offense cannot run.

Ø The player who takes the handoff, toss or pitch can throw the ball from behind the line of scrimmage.

Ø All defensive players are eligible to rush once the ball has been handed off or tossed, or there is a play action fake or fake handoff.

Ø Spinning is not allowed and the ball carrier cannot dive forward or jump to avoid a defensive player or gain yardage (no diving).

Ø All players are eligible to receive passes (including the quarterback if the ball has been handed off or tossed behind the line of scrimmage).

Ø As in the NFL, one player may be in motion, but not in motion towards the opponent‘s end zone at the snap.

Ø A player must have at least one foot inbounds when making a reception.

Ø Only players starting 7 yards from the line of scrimmage can rush the passer.

Ø Only one forward pass thrown from behind the line of scrimmage is allowed in a down.

Ø Interceptions change the possession of the ball.

Ø Interceptions can be returned by the defense.

Ø Substitutions may be made only when ball is dead.

Ø Play is ruled "dead" when:

· An official blows his whistle.

· When any part of the ball carrier’s body, other than his hand or foot touches the ground.

Ø If a ball carrier's flag falls off, the play will be whistled dead and the ball will be spotted at the spot where the flag fell off.

Ø If a player receives the ball by pass, hand off, toss or pitch, after a flag has fallen off, the play is ruled dead at the point he gains possession of the football.

Note: There are no fumbles. The ball will be spotted where the ball left the ball carrier’s hand(s). If the ball is fumbled during the snap, the ball will be placed at the line of scrimmage

REMEMBER, blocking AND tackling ARE not allowed.

If the referee witnesses any acts of flagrant contact, tackling, elbowing, cheap shots, blocking, or any unsportsmanlike act, the game will be stopped and the player will be ejected from the tournament.

FOUL PLAY WILL NOT BE TOLERATED!

Trash talking is illegal. (Trash talk is talk that may be offensive to officials, opposing players, teams, or spectators.) Officials have the right to determine offensive language. If trash talking occurs, the referee will give one warning. If it continues, the player or players will be ejected from the game.

Ø All penalties are 5 yards. The down will be repeated unless otherwise noted, and will be assessed from the line of scrimmage.

Ø All penalties may be declined, except a false start (dead ball foul).

Ø Penalties will not exceed half the distance to the opposing team's goal line from the line of scrimmage.

Ø Game officials determine incidental contact that may result from normal run of play. [All penalties will be assessed from the line of scrimmage.]

Ø Only the team captain and Head Coach may ask the referee questions about rule clarification and interpretations. Players and Coaches cannot question judgment calls.

Ø Penalties after an interception shall be assessed after the return is over and/or the play is blown dead.

Ø Substitution fouls — 5 yards. (player enters field after the ball is “in play” by the referee.

Ø Interference with opponent or ball at the snap — 5 yards.

Ø Interference —5 yards and automatic first down.

Ø Illegal flag pull — 5 yards and automatic first down (before receiver has ball).

Ø Illegal shift or failure to pause for 1 second — 5 yards.

Ø Player out of bounds — 5 yards. (if player goes out of bounds, player cannot return to the field and catch ball)

Ø Illegal forward pass — 5 yards and loss of down. (a second forward pass or after ball has crossed the line of scrimmage )

Ø Running inside a no running zone is a loss of down at the previous spot.

Ø No padding or headwear shall be allowed.

Ø Cleats are allowed, but must be rubber. Inspections must be made.

Ø Official tournament jerseys must be worn during play and tightly tucked into their shorts or pants. Teams without jerseys will be provided colored vests.

Note: There are no kickoffs, and no blocking is allowed.

The game field size can be adjusted to fit the tournament location but must not exceed the following measurements:

No Running Zones: These must be marked 5 yards from each goal line. 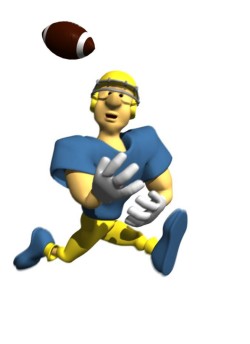