Before serving on the Supreme Court, Marshall served as legal director of the NAACP. Marshall, along with his mentor Charles Hamilton (who was the first black lawyer to win a case before the Supreme Court), developed a long-term strategy for eradicating segregation in schools. Mr. Marshall won the landmark 1954 decision Brown vs. The Board of Education, which declared segregation of public schools illegal. Mr. Marshall was considered to be a straightforward and gentle-spoken man. When asked his definition of equality, Marshall replied, "Equal means getting the same thing, at the same time and in the same place."

President John Kennedy appointed Marshall to the United States Court of Appeals for the Second Circuit in 1961. From 1965 to 1976, he served as Solicitor General under President Johnson.

Thurgood Marshall was a man who stood up for what he believed was right. He fought for the equal rights of all people. He argued 32 cases before the Supreme Court on behalf of others, winning 29 of those cases. Mr. Marshall believed that all children in their earliest years should have a chance to reach their full potential as citizens. Thurgood Marshall passed away on January 25, 1993. 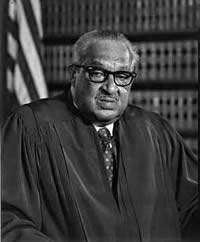